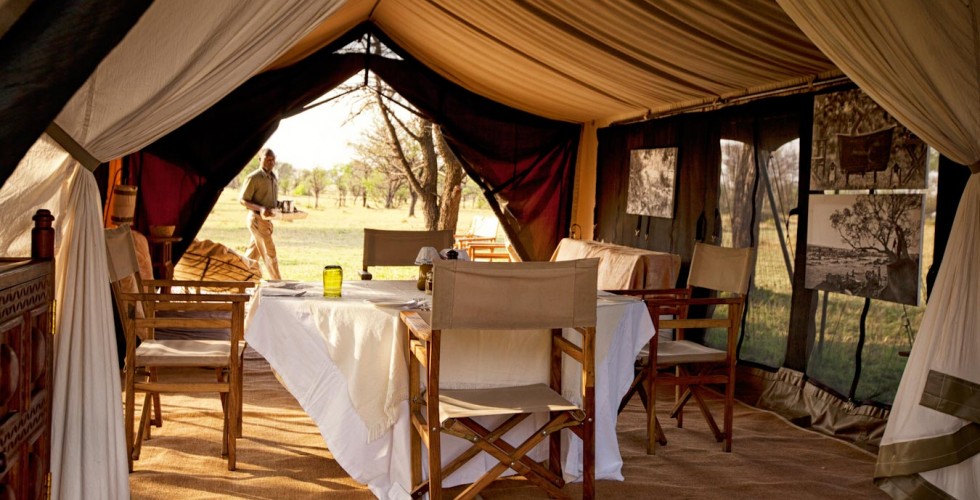 Serengeti Explorer Camp moves twice a year within the Serengeti National Park to ensure the best possible wildlife sightings can be witnessed. From mid-December to the end of March every year, the camp is situated in the Ndutu area on a scenic hilltop site offering the perfect location from which to see the migration and the uniqueness of the calving season.  From here, the magnificent views of Lake Ndutu and unforgettable sunsets can be enjoyed as well.

From the beginning of June to the end of October, the Serengeti Safari Camp nestles in the Lobo region which lies near the Grumeti and Mara Rivers.  This location provides convenient access to the Lobo Airstrip.  Here, guests admire an equally amazing wildlife experience of the migration.  This exact area in which the camp is located only features a very few other camps with uninterrupted nature viewing.

The Serengeti Explorer Camp is not operational during April, May and November, as well as early December. The Camp features Deluxe Tents as well as spacious Family Suites.  The camp is completely solar-powered consisting of twelve tents in total.  Each of the spacious Luxury Tents is decorated beautifully.  The sounds of the surrounding nature can be heard in the indoor space.  A high level of privacy is ensured for guests in their Luxury Suites.

Ubuntu Migration Camp follows the colossal herds of wildebeest as they journey around the Serengeti. From the dramatic river crossings in the north to the fertile grasslands in the south where the wildebeest give birth, we set up camp nearby to ensure you’re always close to the action.

The mobile Olakira Migration Camp follows the wildebeest migration around the Serengeti, from the epic river crossings in the north to the southern plains where they give birth to thousands of calves each year. Stay with us to witness the greatest animal migration in the world.

Between June and October, Olakira is in the north to witness the crossing of the Mara River. Here, watch thousands of wildebeest take a leap of faith into the water, facing hungry Nile crocodiles and cantankerous hippos. When the herds are on the move, the air is full of grunting, thudding hooves and billowing dust. From December until March, we move camp to the southern plains of the Serengeti, where the wildebeest go to give birth and graze on lush grass, and predators such as lions and cheetahs gather to prey on the young.

Serian’s Serengeti Mobile Kusini is a movable camp, and was created to make the most of the spectacular wildebeest migration. From December to May, the camp is perched on the edge of the short grass plains – a perfect vantage point over the vast space where the herds amass to give birth to their young. Nestled in a well-watered wood, ancient trails weave the migration right through the camp.

Open 15th December to 1st may, Serian’s Serengeti Mobile Kusini is set in Serengeti National Park, on the edge of the short-grass plains in acacia woodland, through which the migration weaves. The camp comprises 6 comfortable and intimate tents set in the shade of Tortilis trees. Each has an en-suite bathroom with a flushing toilet and bucket shower.