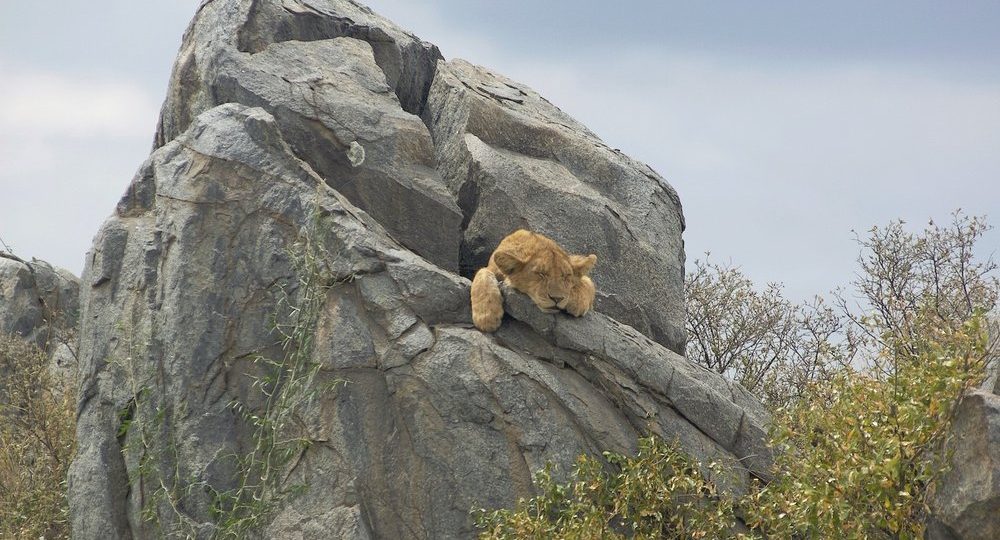 The flat plains of The Serengeti are broken in several places by isolated and much-eroded granite “islands” called kopjes. Also known as inselbergs (“island hills”), the kopjes were created millions of years ago when volcanic bubbles broached the surface and solidified, and were subsequently eroded by rains and floods, carving out the singularly beautiful and sensuous forms you see today. Rainwater run-off from the kopjes and permanent water pools caught in rocky clefts make them particularly good for spotting wildlife in the dry season when lions like to lie in wait for other animals coming to feed or drink – for this reason, take care when walking around kopjes.

Lions, almost the exact color of the grass in the dry season, are more easily visible at some of the rocky kopjes, granite inselbergs scattered across the landscape. The Moru Kopjes are favorites among many cats, including lions, leopards, servals, and caracals, and you may even find elephants in the area. The kopjes also host a rare and well-signposted Maasai rock-art site. Simba Kopjes are frequently used for sunbathing by the lions after which they are named. Gol Kopjes are popular with cheetahs, while the Maasai Kopjes again attract lions and formidably large cobras

Humans, too, have long been attracted to kopjes, both hunter-gatherers such as the Dorobo, who were evicted in 1955, and seasonal “migrants” such as Maasai cattle herders. The Maasai, evicted in 1959, left their mark – literally – in a rock shelter on one of the Moru Kopjes 32km south of Seronera. Here, a natural rock shelter is daubed with rock paintings (in red, white and black) of Maasai shields identical to ceremonial shields still used today. The paintings, accompanied by drawings of elephants and less distinct animal and human forms, were left by young Maasai warriors (morani) for whom the site was the location of an orpul meat-feasting – as you can tell from soot lining the shelter’s ceiling. According to Maasai custom, junior warriors were prohibited from eating meat, at least in public, so they’d steal a cow and bring it here. As with all rock art, the paintings are perishable.

The rock gongs Another thoroughly enigmatic kopje, 1km away, contains rock gongs, which are an ensemble of three loose boulders. One in particular – a large lemon-shaped wedge – bears dozens of circular depressions, created by people repeatedly striking the rock with stones to produce weirdly reverberative and metallic sounds (the sound differs depending on where you strike the rock). Although rock gongs are nowadays played only by tourists, the wedge-shaped one was certainly used as an instrument way before the Maasai arrived a couple of centuries ago (they lack any musical tradition involving percussive instruments) and similar gong rocks have been found as far south as Zimbabwe. However, as little is known of the now-vanished hunter-gatherers who presumably made and used the gongs, their exact age and purpose remain a mystery. Incidentally, time spent poking around the boulders may turn up a surprise – in 1992, a species of tree frog hitherto unknown to science was discovered in one of the rock gong’s depressions.