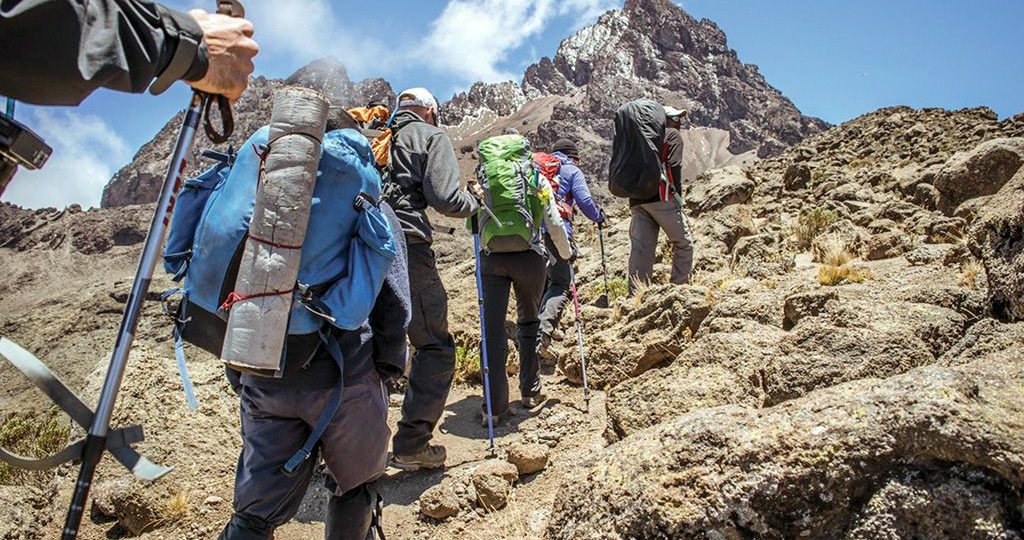 Kilimanjaro National Park covers an area of 760 sq km (293 sq miles). It was gazetted in 1977 to protect the mountain above the 2,700-metre (8,858ft) contour and includes the two main peaks: Kibo (5,895 meters/19,340ft) and Mawenzi (5,149 meters/16,893ft). Below this is a buffer zone of Forest Reserve to the 1,800-metre (5,905ft) contour. The summit of Kilimanjaro was first climbed in 1889 by Dr. Hans Meyer and Ludwig Purtscheller (for more information, click here). Today, almost 40,000 people a year make a bid for Africa’s highest mountain. Increasing numbers have made a considerable environmental impact on the park’s trails.

Kilimanjaro straddles the border of Kenya and Tanzania but the peaks all fall within Tanzania and can only be climbed from within the country. There are several places on the lower slopes from where the mountain can be ascended, but most hikers us the Marangu as it is the cheapest, easiest and has the best facilities. A number of more obscure can be used and Kilimanjaro Climbs can be arranged at any time of the year, but the hike is more difficult in the rainy months, especially between  March and May

There are seven established Kilimanjaro routes and each of them has its pros and cons. Making the right choice when it comes to the route is an important bit towards a successful summit which usually comes down to personal choice and there isn’t a best schema or route. In order for you to figure out what is the best, I want to give you four questions that you should ask yourself; How many days do you have? When do you want to climb? What is your budget? What do you really want to get out of this?

You can climb Kilimanjaro anywhere between 5-9 days. Most people go for 7 or maybe 8 days. It is important to note that these are the days that you’re actually hiking on the mountain. So you need one for more arrival and one more after for departure. So if you choose the 7-day route, it means you have like nine days for that.

What do you actually want to get out of the climb? Are you there for the beautiful scenery? Do you prefer a less crowded hike or are you there mainly for the physical/mental challenge?  Whatever it is. There’s a route for you.

There’s only one route that approaches the mountain from the north, which is the Rongai Route. One route from the east is the Marangu Route. All the other five approach the mountain from the West or Southwest these include; Umbwe Route, Lemosho Route, Shira Route, Machame Route, and also the Northern Circuit.

Four out of these 5 use southern track routes, so that means they all start at different points, but they all meet at Barranco Camp and circle the mountain on the south side all the way to the summit. The Northern Circuit is the only one and the newest route that uses the northern slopes of the mountain, that’s also why it is called the Northern Circuit.

The Rongai Route is a medium-difficulty route, It is a particularly good choice if you’re climbing during the wet season because it approaches the mountain from the north. That means it receives less rain compared to the Western route. It is not as scenic as the Western routes as it doesn’t have as much variety as for instance a Lemosho Route or Northern circuit. But it’s still a nice route. You can do it in six days but normally we would recommend doing it in seven days with an additional acclimatization day.

The Marangu Route is the oldest and the most established route on Kilimanjaro. Sometimes referred to as polar route or the tourist route as well. It is the only route that offers accommodation (huts) and it can be climbed between five or six days. It’s a popular choice if you climb during the wet season mainly because of the huts which offer more protection from the rain than you would have when you camp on the other routes. Marangu Route is not very scenic and it also goes up and down the same path.

The Umbwe Route is the shortest and the steepest route up Kilimanjaro. It is also considered the most difficult and doesn’t have any good opportunities to acclimatize properly. Umbwe Route is a challenge for only experienced trekkers and it doesn’t offer much scenic views.

The Machame Route is one of the most scenic routes on the mountain and it’s also one of the Western approaching routes. It is considered very beautiful. It has a great acclimatization profile which leads to high success rates. It can be done in six days; mostly it’s done in seven days. That’s the route we would recommend most. The only downside of the Machame Route is that it has become very popular so it can get more crowded than other routes

The Lemosho Route is considered the most scenic route on Kilimanjaro and it’s also one of the newest routes. The only difference towards Machame Route is that it has less people and has a different start. So both routes join each other on day three and do the last couple of days together. Lemosho Route also offers a great acclimatization profile, therefore, has a very high success rate.

Shira Route is another route of the western part. It is basically the old Lemosho Route whereas Lemosho is an improved version of the Shira Route. Shira Route starts at quite high points, so you drive up all the way with a car and then you start hiking above 3000 meters which is not as good as hiking up gradually as you could do for the Lemosho Route. Therefore we normally advise people to choose the Lemosho Route over the Shira RouteThey’re very similar though, and they have the same scenery from day-2 onwards.

Last but not least is the Northern Circuit, it is also a Western approaching route, but it’s the only one that actually circles around the mountain on the northern side rather than the southern side. That makes it less crowded and also offers some beautiful views. The only downside of the Northern Circuit is basically that you need nine days. But if you have time and a little more budget it is definitely a very beautiful route It also has a very high success rate due to the length of nine days.

If you have to climb during the wet season have a look at the Rongai or the Marangu Route. Also if you prefer a, let’s say more easy climb if you want something with beautiful views, a greater acclimatization profile, have a look at either Machame or Lemosho route. Also, keep in mind that there’s the Northern Circuit, which is a really beautiful great acclimatization profile and has very few crowds. The only thing to consider is that you need nine days and also need a higher budget.

You can climb Kilimanjaro all year round, there are two wet seasons you may want to avoid though; the long one and the short one. The long wet season is from March to May and the short one is basically just November. If you plan to climb in any of these four months, there’s two routes that we would recommend; one is the Rongai Route. Rongai Route approaches the mountain from the northern side, which has generally less precipitation. Second one is the Marangu Route which easiest and has accommodation all the way to the top.

In addition to your two wet seasons, we have two main dry seasons.  These seasons take place between January and the end of February and again between June and October. This makes this time of year, the perfect time to climb.

Many Travellers that climb Kilimanjaro will combine their plan with a safari, either before or after their climb. The dry season is a particularly good time to do this because it is easier to spot the animals. December is also a really popular month to climb. There are a few reasons; you can fully experience snow on the summit, you can even climb during full moon or you can experience the first sunrise of the year on a New Year’s Eve plan. To sum it up, if you’re not afraid of a little bit of rain and some cold weather, and even though we wouldn’t really recommend it, anytime between March and May and even November are all do-able.

Climbing the mountain is not cheap. National park fees, used to conserve the environment, include a daily entrance fee of US$70 per person, a hut/camping fee of US$50/60 per night, and a rescue fee of US$20 per climb. Allow for costs relating to porters, guides, food, and transport, and you must expect a budget climb for two to four people to cost at least US$2,200 per person.

Climbing costs differ widely, according to the route taken, the number of days spent on the mountain, and the number of people in the party. Camping is more expensive than staying in huts as more equipment needs to be carried. In addition to the amount paid for the climb itself, it is important to budget for tipping the guides and porters. Approximate figures per day are US$25 for the guide, $15 for the cook, and $10 for each porter, but be sure to ascertain the going rate from tour operators before departing.

Climbing Mount Kilimanjaro is marketed as an easy trek to the roof of Africa, attracting many people who have little experience of hill-walking, let alone climbing – and who arrive ill-prepared. Kilimanjaro should not be underestimated: it claims several lives a year. Although walking on the easy routes – Marangu and Rongai – may not be taxing, few take into account the effects of altitude (headaches and nausea), which can be pronounced and debilitating. Being super-fit does not guarantee to scale the summit. You can double your chances of reaching the top by spending several days acclimatizing and preferably walking at altitude, before the climb. Many routes give a number of options for the days taken. It pays to spend an extra day on the mountain if time allows.

What to Pack for a Kilimanjaro Trek

It may be exciting, but climbing Kili is rarely easy or comfortable. The biggest danger to watch out for is altitude-related pulmonary oedema, a dangerous illness caused by ascending too rapidly, resulting in fluid build-up in the lungs. Most susceptible are fit young men. Symptoms include labored breathing, shortness of breath at rest, and coughing up frothy spit or blood. This can be fatal. If these symptoms exist, it is imperative to descend immediately and get medical attention. Useful equipment includes: